In Memory of
Robert W.
Kress
1939 -
2018
Click above to light a memorial candle.
Menu
Send Flowers

In the event that there is an error
in the information presented,
please contact the funeral
home by clicking here. 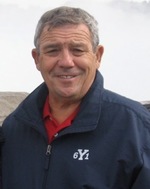 Robert W. Kress, 79, of Gainesville, passed away on April 17, 2018 at the Medstar Georgetown University Hospital, surrounded by his loving family.

Bob was born in Noank, CT on February 2, 1939, the son of Adele P. and Carl C. Kress. He is survived by his wife of 50 years, Kathleen Nicholson Kress, and their daughters and sons-in-law, Julie K. and Jeffrey Becker, currently residing in Prague in the Czech Republic; and Joann K. and Michael Hardy of Clifton, VA. He is also survived by his grandchildren, Ryan Becker, Nicholas Hardy and Lily Hardy who were, and will always be, the loves and eternal lights of their PopPop's life. Also surviving are his cousins Irene McDonough of Stonington, CT; and Marie Craddock of New London, CT; his sister-in-law and brother-in-law, Karen and Robert Wardrop of Newington, CT; and his nephew James Wardrop of Cromwell, CT.

Bob was a graduate of Fitch High School in Groton, CT, and earned civil engineering degrees from Yale University in 1961 and 1964. He was elected a Fellow in the American Society of Civil Engineers in 2009.

Before relocating to Heritage Hunt in March of 2016, Bob and his wife lived in Skillman, NJ for 40 years. Bob was employed by Princeton University until 2009 as a facilities construction manager where he oversaw the successful completion of many projects on this beautiful academic campus. He was also civic minded and served on his municipality's township committee for many years and was elected mayor for two terms. He was one of the driving forces in making certain that a Memorial Park to all of the township's Veterans be built and, after many years of trying to get this project off the ground, the Memorial Park was dedicated on November 11, 2011. His sports interests were his beloved Boston Red Sox and, of course, his never ending quest to break 100 on the golf course, any golf course.

A Mass of Remembrance will be held in the Chapel at the Baker-Post Funeral Home & Cremation Center, 10001 Nokesville Road, Manassas, on Friday, April 27, 2018 at 11 a.m. Guests are invited to arrive after 10:00 a.m. to pay respect to Bob's family.

Interment will take place in New Jersey at a later date.

In lieu of flowers or other expressions of sympathy, the family requests that consideration be given to making a donation to St. Jude Children's Research Hospital, P. O. Box 50, Memphis, TN 38101-9929.


To send flowers to the family or plant a tree in memory of Robert W. Kress, please visit our Heartfelt Sympathies Store.